YGBM win through to Quarter Final of Debating Championship 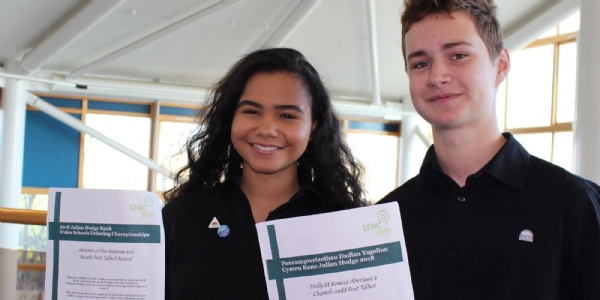 Competing against three other schools, Huw and Tia won the Swansea, Neath and Port Talbot round and now go on to the quarter finals. The eight regional winners will compete against each other in Newtown, early in January 2019.

Huw is no stranger to competitive debating as he was a member of Team Wales who travelled to Croatia last July, joining 71 other countries for the World Schools Debating Championship.

The Team of five, made up of YGBM, Atlantic College and Cardiff Sixth-Form College, competed against teams from eight different countries including South Korea, Switzerland and Malaysia.

Huw reflected, ‘I think the best thing for me was to meet like minded people from all over the world. The experience gave me the opportunity to make lots of new international friends.

Debating helps in every walk of life. Communicating with others is important in every job, so will be a great benefit to me in the future.’

Tia explained, ‘Although debating is new to me, it has been an amazing experience to learn the skills and I’ll be able to use them later in life. I found it really interesting to debate against different perspectives and backgrounds’.

Miss Catrin Bennett, Deputy Head Teacher, commented, ’YGBM is very proud of Huw and Tia. They have had national success in public speaking competitions and are now carrying on their success to the debating arena.

Huw was the only state school pupil, and the youngest by two years, in the Team Wales debating team which is an outstanding achievement for him and YGBM. These are English language debating competitions and shows as a Welsh medium school we are able to compete with the very best’.

When asked how do they feel about their chances for the next round? The response was a wry smile, suggesting quiet confidence! Da iawn a pob lwc.