A visit to the Menin Gate for YGBM pupils 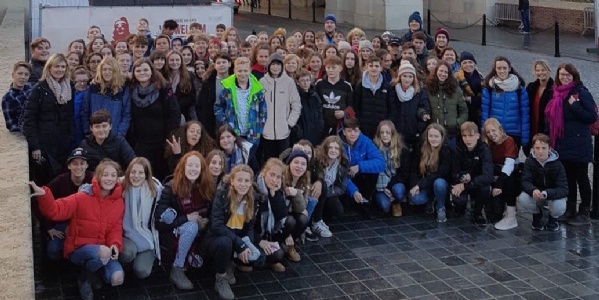 Ysgol Gymraeg Bro Morgannwg pupils have had a busy half term, with school trips to China, Iceland and a poignant trip to Belgium’s battlefields.

This initial trip to Belgium was organised to commemorate the centenary of the end of World War 1; with 90, year 9, pupils visiting important historical locations of the Great War.

During the three day tour, the pupils joined families of the fallen soldiers to take part in the ‘Last Post’ service at the Menin Gate Memorial to the Missing in Ypres, Belgium.

Pupils also visited Hedd Wyn’s grave; the Welsh poet from Trawsfynydd who died in the Battle of Passchendaele, just months before the announcement that he had won the Eisteddfod, and since then, in his honour it is known as ‘the black chair’. By his graveside, teachers and pupils paid tribute to him and all the other Welsh soldiers who had died in that battle.

The next stop was John McCrae’s Memorial, set in the area where the poet had written his famous poem ‘In Flanders Field’ and the trip concluded with a visit to the Welsh Soldiers War Memorial located at the Battle of the Somme.

Ms Heledd Lewis, YGBM Welsh Teacher explained, “During the first term in year 9, pupils study the Great War in their Welsh, English and History lessons. This collaboration of subjects is part of the new school curriculum introduced by the Donaldson Report. This new method of cross-curriculum teaching is designed to give more impact and will deepen the pupils’ understanding of their studies.

To conclude our terms work with this special trip has given the children a greater perspective of the immensity of this war. Especially, as some of our pupils had family members who fought in these battles one hundred years ago.”

Lillian Evans ,year 9 pupil, commented ‘This was an amazing experience which made us empathise with the young soldiers and the conditions they had to face. It gave us an unforgettable understanding to our studies, and made us all realise the massive effect the Great War had on everyone, byddwn yn eu cofio.’

This week, year 9 pupils will lead an assembly to remember the soldiers who fought for us and will share their experiences and knowledge with the rest of the school.